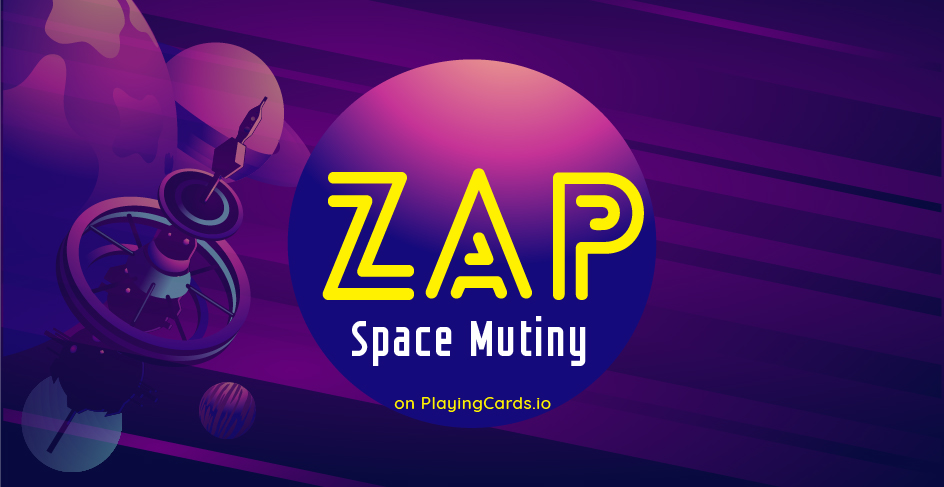 Zap is a sci-fi game of hidden identities. Each player will have 1 Hidden Identity, 1 Skill, a hand of 3-5 action cards (Purple deck labeled Zap) and hearts which represent health. Each Hidden Identity has a unique goal; eliminate your enemies by reducing their hearts to zero and your team wins. Compare to BANG!™ card game published by DV Giochi / Mayfair Games.

Reach: Some cards require you to reach a player to use the card's effect on them. The players seated to your left & right around the virtual table are 1 space away, the player beyond your neighbor is 2 spaces away from you.

You always have a reach of 1. You may Zap players beside you. For example, Player 1 may Zap players 2 or 8. Bionic Eye and Bionic Leg affect reach when using or avoiding a Zap, Kick, or Tractor Beam. Cyan weapons extend your reach for Zaps only. When a player is killed, move their Skill card aside. Their spot is no longer counted; only living players are counted when measuring reach. 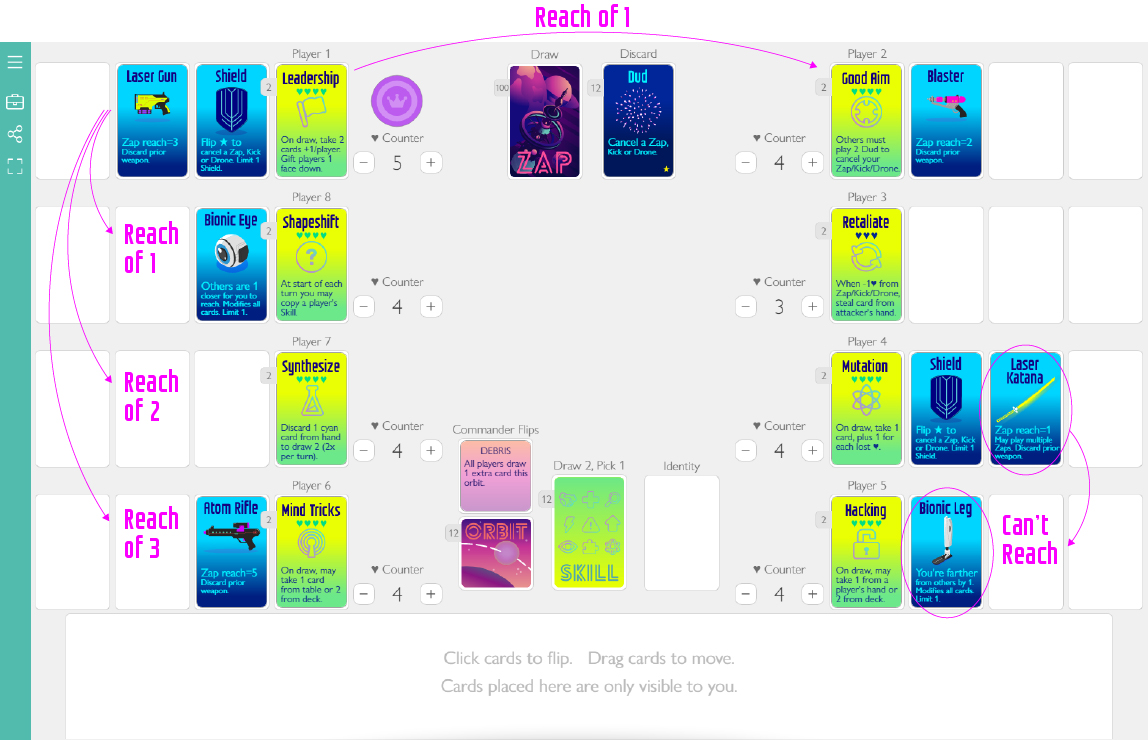 Flip:** **Some cards have an outcome based on chance. Flip the top card from the draw pile into the discard. Check the lower right corner for a yellow symbol (star or radioactive), then follow the card instructions. If you begin your turn with Supernova and Containment on you, flip for Supernova first, followed by Containment, then take your turn.

IF you discard: Special cards require you to first discard a card from your hand in order to take the action. These cards are: Laser Drone, Moonrise, Sidekick, Black Hole.

Out of Turn Play: Any time you are attacked, you have a chance at playing a card out of turn. You may flip for a Shield, reply with a Dud, etc. If you are about to lose your last heart, you may discard a Cosmonaut to retain that heart.

When a player dies, they reveal their Hidden Identity. If an Alien was killed, the player who actively used a Zap, Kick, Laser Drone or Face Off to defeat them may draw a 3 card reward. Passive attacks of Supernova, Solar Flare or Asteroid Field do not give a reward. If the Commander has killed a Human, there is a penalty. The Commander must discard her hand and all her Cyan cards on the table (except any Supernova played on her).

When the deck runs out, reshuffle by using the number tab to flip the stack, shuffle the stack, and then drag the stack back to the draw pile.

When only 2 players remain, Cosmonaut cards immediately have no effect. Moonrise, Sidekick and Space Bar may still be used.

This optional deck lets you add variation to your game. Begin on the Commander's second turn. Before drawing, the Commander reveals an Orbit card which changes the rules until the Commander's next turn. When the Orbit deck runs out all players will lose 1 heart.

Tractor Beam allows you to take a card from another player whom you can reach. You may pick a cyan card they have in play (including a Supernova) or a random card from their hand. The stolen card goes into your hand and may be played immediately.

A: Commander, how many cards do you have in your hand?

A: I'll take the 3rd from the left

(B flips 3rd card face down in their hand, then places it on the table for player A to take)

Black Hole acts like a Vaporize card which affects every player. To activate this card's ability, discard a card from your hand. Starting with the player on your left, you select 1 of their cards from the table or a random card from their hand. Cards are placed in the discard pile.

A: Commander, how many cards do you have in your hand?

A: I'll take the 3rd from the left

Supply Raid gives each player 1 card. From the deck lay out 1 face up card for each alive player. You chose one to put in your hand. The player to your left picks next. Repeat until all cards are taken.

Supernova is played on yourself. Before the start of your following turn, you will flip to see if it explodes. If you flip a yellow radioactive symbol you lose 3 hearts. Otherwise, you pass the card to the player on your left. They will flip before the start of their turn. A player who dies from Supernova is not killed by any specific player.

*Containment *is played on another player. Before their turn begins they must flip a card. If they reveal a star, they discard Containment and continue their turn normally. Otherwise, they lose 1 turn and immediately discard the Containment card.

Bionic Eye makes others easier for you to reach when you play a Zap, Kick or Tractor Beam. In addition to reaching the player beside you, you can also reach their neighbor. Your opponent's reach is not affected. You may only have 1 Bionic Eye on the table in front of you.

Bionic Leg makes it harder for other players to reach you. Your immediate neighbor may not use Laser Katana, Kick or Tractor Beam against you unless they have a Bionic Eye. Your ability to reach others is not affected. You may only have 1 Bionic Leg on the table in front of you.

Katherine Inouye Lau is the licensee of the illustrations in "Zap: Space Mutiny"

BANG!™ is a registered trademark of daVinci Editrice Srl.