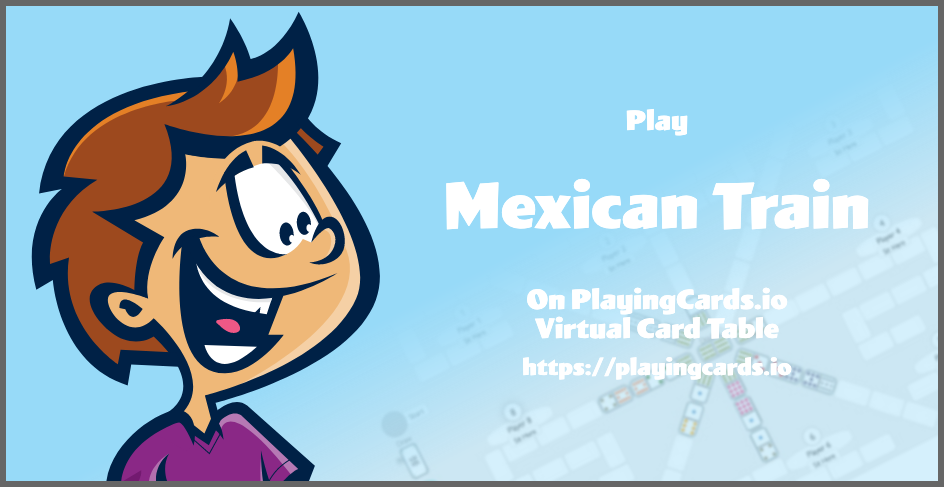 This Mexican Train table can seat 2-8 players. Each round, players aim to play all their dominoes before their opponents do. After 13 rounds, the player with the lowest score wins!

At the center of the table is the Double slot.

Each train is a line of dominoes. The first domino must match the Double. If you run out of domino slots, continue to wrap your train on the table.

The Turn Button shows whose turn it is. At the start of each round, click this button until it shows the player with the current double.

Trains are round color marbles.

Each player clicks "Sit Here" on a Player Seat:

The first domino must be a double and is played into the center space marked Double.

The game is played in 12 rounds. Each round, play all your dominoes before your opponents can. At the end of each round, score the dots on any dominoes remaining in your hand. The lowest score after 12 rounds wins!

The Deal button places 12 dominoes in each player's private hand, the rectangle at the bottom of the screen.

The player holding the double 12 goes first. (Press the ) Play into the Double space. Then play one additional domino, which shares a number with the double to begin your train.

If no one has the required double, players either draw an additional tile or agree to call for the next lower double.

On your turn, play 1 domino to a train: Your train, the public train, or another player's train if it is "open."

Trains start in the center and match the previous domino played. The first domino of a train matches the Double.

If you can't play, you must draw. You have another chance to play. Otherwise, mark your train "open" and end your turn.

Whenever you play a double, you must immediately play another domino which matches that double. If you cannot, draw a domino. If you still cannot match the double, mark your train as "open" and end your turn. Variant: the next players are required to match your double or else draw.

Mark a train "open" by taking a colored marble and placing it near your train. This shows other players they may now play on your train. Your train is open until it is your turn again; if you can play a domino anywhere on the table, you remove your train.

There is one public train which is always open. It maybe started by any player. Variant: players can start as many public trains as they would like, place in blank areas of the table and mark with a marble.

If you run out of slots on the table to play your dominoes, snake them around in the empty space.

The round ends immediately when a player plays their last non-double domino.

If a player's last domino is a double, they must draw in order to "cover" the double. Then they may play if there is a legal move and end the round. Otherwise the round continues.

At round end, all players add up the dots on dominoes which remain in their hand. Variant: 50 points for holding the double blank. Have one player keep a running tally.

Starting a New Round

Return train marbles to the side.

Click Deal to begin the next round, starting with the next lowest double. Click Turn Button until you cycle to the player who placed that round's double.

After 12 rounds, the player with the lowest total score wins!