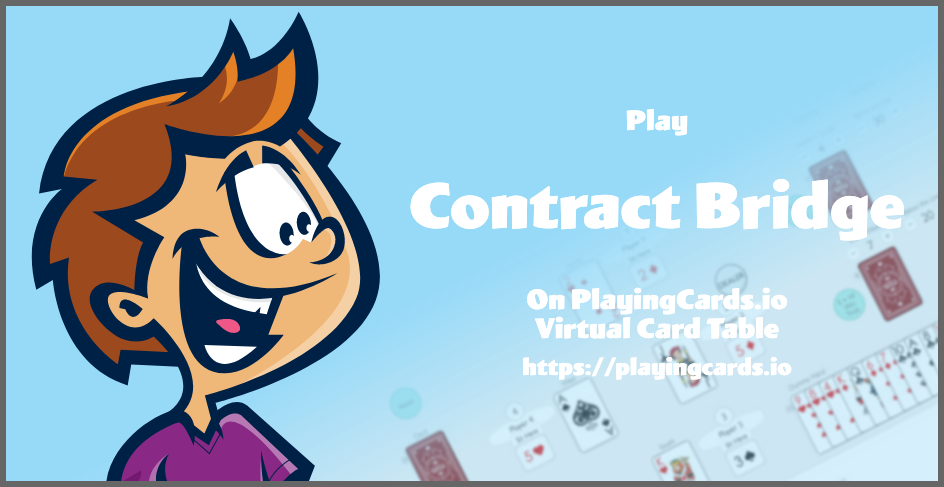 Contract Bridge is a multi-round game for 4 players in 2 teams. A team predicts and then tries to win a number of tricks. Each round one player sits out as the dummy hand.

Cards: Ace is the highest, 2 is the lowest

Suits: No Trump is the highest, Spades, Hearts, Diamonds, Clubs is lowest

Suit of Trumps is determined by the winning bid

Each round has 3 phases: Bid, Play Tricks, and Score

Chose a dealer, mark the dealer's seat with the yellow pin.

Players sit at a player seat.

Use the Deal button to give 13 cards to each player. Your cards will appear in your private hand which is the rectangle at the bottom of your screen. The player left of the dealer starts the bidding. 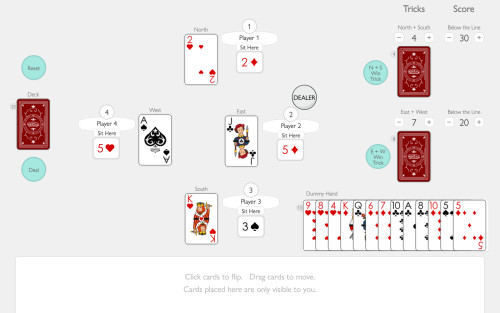 Your goal is to score points for your team. You gain points by successfully achieving your bid or by preventing your opponent from achieving their bid. There are bonus points which do not contribute to the end game conditions.

The player left of the dealer bids first. Each player may bid or pass verbally (please bring your own audio chat). Bidding continues clockwise.

A bid must be higher than the previous bid.

When 3 players pass in a row, the contract is won by the last bid. The player with the last bid is called the Declarer. Enter the last bid in the Contract portion of the screen.

Example Strategy: The suit you name communicates to your teammate which suit is your strongest. If your teammate names a different suit, they are telling you they have useful cards in that suit.

When you feel the other team has bid more than they can win, you may use your bid turn to state "Double." This indicates you think their bid will not succeed. If you are correct, your team will receive bonus points. If you are incorrect, the Declarer's team will receive bonus points. In response to a "Double," the Declarer's team may state "Redouble," creating a 4x points multiplier.

How A Trick Works

A trick consists of 4 cards, 1 from each player

The first card sets the suit

Other players following in clockwise order

Each must follow the first card's suit, if it is in their hand. Otherwise, they may play a trump card or another suit

The highest ranking card wins the trick. Use a team's Win Trick button to move the 4 played cards to the discard pile of the team which took the trick and increase their trick counter.

The player of the winning card leads the next trick

Ranking: Trump suit is highest, lead suit is next, other suits have no value. Aces are high

for the First Trick

The player left of the Declarer goes first

Next, the Declarer's partner lays all their cards face up in the Dummy Hand area, visible to everyone

The Declarer plays a card from the Dummy Hand

End of the phase

Once all cards have been played, proceed to Scoring.

Below are the basics for scoring. You may wish to score using audio chat, pen, and paper. For convenience, there is a "Below the Line" counter on the right of the screen for players to quickly see scores as they race to 100 points. Please note: there is no "Above the Line" section on the screen.

Points are scored into one of two areas:

A team which has won 1 round is labeled "Vulnerable" and special scoring rules apply to them.

Contract (below the line)

Score the successful contract (the number of tricks over 6) below the line.

Bonus & PenaltY (above the line)

If the Declarer's side won more tricks than they bid (and the contract was not doubled), they get an additional score (above the line) for Overtricks. Just as for the contract, score: 20 per trick for clubs and diamonds. 30 per trick for hearts, spades or no trump.

Start a New Round

Reset the Bid and Tricks counters.

Click the Deal button and repeat the 3 phases: Bid, Play Tricks and Score.

The game ends immediately when one team scores 100 points or more below the line.